Tanzer 16 -- Update on this year's iterations of improvement

Tanzer 16 -- Update on this year's iterations of improvement--March 21, 2016  -- The first race is May 12--We are a long way from ready and we are going to 2-weeks of great Mexico weather in there. Not a lot of time.  But we bought two extra weeks by volunteering to take the first committee boat duty of the year.  So really we don't have to be ready until May 26.  Here are the status of the different projects.  I am really not in favor of keeping track of prices.  I throw the receipts away.  But some of you might be interested  so I will throw in prices as I remember them.


Spinnaker launching tube.  Repaired and installed.  Needs to be painted when the deck is painted. The tube cost a hundred bucks and probably $40 in repairs Call it
$150
Spinnaker.  Schurr Sails has removed the incorrect numbers, examined the sail, and installed a retrieval patch.  Patch was fifty changing the numbers was cheap-got lucky they came off easily.

$125
Roller furling jib.  Schurr made one up without a sun cover (we trailer the boat)
I sent them the following drawing:
$125 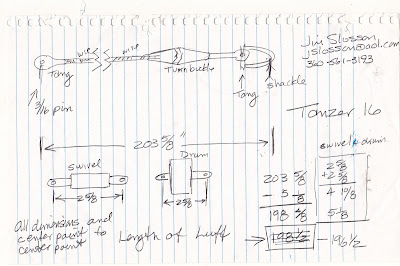 Roller furling drum.  Ordered a small Harken set up from Maui Pro Sailing.  I had to make a stainless strap so it would fit the mast attachment point.  I think the whole thing cost about

Spinnaker Retrieval Sleeve.  Turned out Schurr could make that too.  I redrew the design on the Tanzer 16 website and made some changes.  Schurr made more changes in the battens and draw strings. 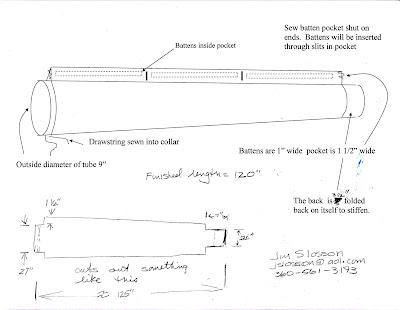 $100
Painting the hull.  Three quarts of Largo Blue Brightside, two quarts of primer, three quarts of thinner about three large packs of sandpaper.  Doesn't include new HVLP spray gun. North of
$420
Repair the seat. (seats as it turned out)--I found a new crack on the other side. About
$90
Side rollers and new keel rollers for trailer.  We don't want to scratch our new paint.  Ordered from Cabellas and US Trailer Store.

$150
New Trailer Lights.  LED's mounted out of the water and a additional hardware to mount.
$80
New Graphics in white, boat name and Tanzer logo.

More paint for the deck, seats and floor.  I just dropped another bunch of money at West Marine today.  The deck will need two coats of primer and two coats of white plus a coat of Interdeck to make it less slippery.  The seats will get two coats of primer and two coats of white.  The tops of the seats will get an extra coat of Interdeck. The floor will get two coats of Bilgecoat.  I haven't bought the brushes or rollers yet.  I am going to try my thinner idea and spray some of the first few coats.
$300
Other stuff.  I can't really remember, but I do know that we need a new Windex. That's really
more just maintenance.  And we can't really count the outboard we bought last year.
So it's true.  A boat is a hole in the water into which.....Luckily this is a pretty small hole as
boats go.  I'm pretty sure that this year's total is higher than:
Total    $2609

Ouch! See--it's just not a good idea to keep the receipts or think about what you are spending.  At least when the park me over in the convalescent center, I will be able to talk about the cool little boat I used to have.

I did forget one
Rubrail.  There are 6 pieces sitting in a 20-foot long box in the overhead of the carport.  It will take two people most of a day to install.  They will be one of the last things to go back on the boat.

Oh! I just remembered--I bought the boat for $1600.  And I spent a lot of money last year -- three new sails, winch, compass, spinnaker blocks, pole.  A mistress might have been cheaper.

Well, back to sanding the deck and seats at 0500 tomorrow.

Anything worth doing is worth overdoing.