Racing the Tanzer 16 in Mixed Fleets with Short Courses

Some Observations and Suggested Strategies for Racing the Tanzer 16 in a mixed fleet with short courses.

When you have the luxury of sailing in a class fleet, your boat is, theoretically at least, just as fast as all the other boats.  The race winner will be the boat with the best start, the newest sails, and the least screw-ups.  That simple dynamic changes when you race in mixed fleets.  Some of the boats are faster; some are inherently slower, and they have vastly different handling characteristics.

Handicapping      Most of us won’t have the opportunity to race with a fleet of measured Tanzer 16’s.  Instead we will be competing in mixed fleets using the Portsmouth Yardstick handicapping method.  This time-on-time system corrects overall elapsed time.  Theoretically, faster boats owe enough time to slower boats so that the better sailed boat finishes sooner.  (I like to use the terms “we owe them”, or “they owe us” and “corrects out.”)
For example suppose my Tanzer finished dead even with an O’Day 16 and a Harpoon 5.2 and the race lasted 25 minutes.  The O’Day would finish first with a corrected time (CT) of 25.3 minutes, The Tanzer would be second with a CT of 25.7 minutes, and the Harpoon would be last with a CT of 25.8 minutes.  In most cases the table seems pretty fair and matches my observed experience on the race course—But an adjustment for theoretical speed does not tell the whole story.  A number of other factors affect race performance and some are very specific to the Tanzer itself.


The table below summarizes the handicapping figures for some of the boats in our fleet.  Particularly note the last two columns.  These figures are for a 25-minute race that is typical in Budd Inlet.

The time correction listed in yellow especially irks me.  I sailed 420's in college, and I believe they

should be giving us time--lots of time--when the winds are light.

Time to Tack      The Tanzer is a very stable, even forgiving boat.  The rounded sides give it plenty of buoyancy and it wants to sail in a straight line.  I often take my hand off the tiller, and the boat sails on in a straight line held only by a shock cord snubber we attach to the tiller and the bottom of the aft locker.  But—and it’s a big but--the Tanzer is very slow to turn through a tack even in a good breeze.  In a light breeze, it is easy to get locked in irons.  (See post: Tanzer 16 Locked in irons at the weather mark  --  August 4, 2015.)  Except for the O’Day, every boat on the race course turns more quickly than we do.  I have seen the 420’s turn in six seconds when they properly execute their roll tack.  Just for fun I tested my idea that the Tanzer is hard to turn.   Using a paddle in calm water with no wind, it took seven deep strong strokes on one side to turn the bow just a few degrees.  On the eighth and ninth strokes it began to turn faster.
Boat Weight      The Tanzer is relatively heavy for its length.  The Scot is heavier and has a slightly lower sail area to displacement ratio (SA/D), but its extra length gives it a higher theoretical hull speed.  The Harpoon is heavier, but has a higher SA/D ratio, and it seems to turn quicker.  The O’Day is heavier and has a lower SA/D ratio.  That’s probably why we usually beat the O’Day in our fleet if we don’t screw up.
The weight of the boat is a huge factor when the winds are light.  In our fleet the Lasers just sit near the starting line and luff their sails in light air.  When the gun goes off—or seconds before it goes off they trim their single sail and accelerate a away from the line.  The Lidos and Coronados can use a similar tactic—they get to the line a little early, luff until the gun goes off, then trim in their sails and accelerate away.  The heavier boats have to be moving when they hit the line because it takes them a long time to get up speed from a standing start.
Optimum Wind Speed    In one of the Tanzer 16 Association articles the author points out the Tanzer sails best in winds of five to twelve knots.  This matches our experience.  Above 12 knots, keeping the boat upright becomes a chore.  Below five knots, the lighter boats have a definite advantage.  We have sailed our Tanzer in pretty strong winds, 20 plus knots.  We used a reefed main and the small jib.  We weren’t really racing.  We were just keeping the boat upright.  (See posts:  Tanzer 16 --Kind of a slug in light air --June 13, 2015, Tanzer 16 in heavy wind, and a compass -- June 20, 2015)  The lighter boats are at a distinct disadvantage in the stronger winds the really well-sailed boats hike far out and even break out the trapeze gear.
Fluky Winds and Tacking   When the wind shifts frequently, the racer needs to respond by tacking on headers.  If you sail a Tanzer 16, on every tack you will lose somewhere between five and 15 seconds to the opposition.  With many tacks, you are effectively out of the race by the time you reach the weather mark.
Length of Courses    Short courses do not favor the Tanzer.  You need your spinnaker downwind (it is included in your rating); it helps even out the upwind advantage enjoyed by the lighter boats as you all worked you way to the weather mark.  If the course is too short, the spinnaker set will cost you more time than you save. (See post:  Tanzer 16 Racing with a spinnaker--cost/benefit in minutes  --  August 28, 2015) 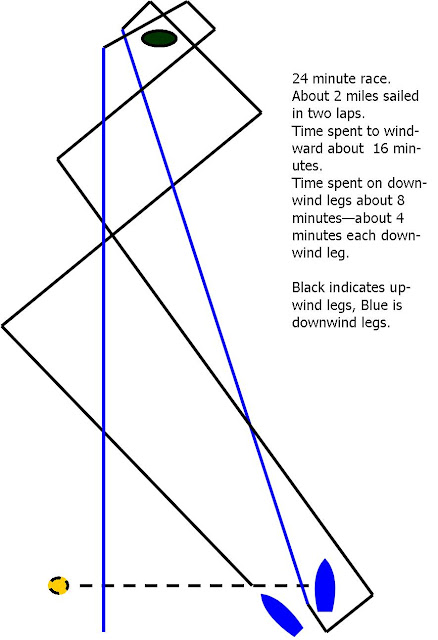 Your Angle to the Wind on a Close Hauled Course     We have a compass, and we have made a lot of measurements as we try to reach the weather mark.  The Tanzer seems to sail about 55 degrees off the wind.  If you assume that you can tack when the weather mark is abeam, you will almost always be wrong; you will not be able to fetch the mark.  We have found that if we tack when the weather mark is about 10 degrees abaft of the beam we usually make it.  (Of course with current and windshifts that does not always happen.)  While it seems counter-intuitive it is always better to risk overstanding the mark than to make two extra tacks.  Overstanding the mark costs a lot less time than the sixty seconds you eat up with two tacks.
Summary    When you race the Tanzer 16 in a mixed fleet you are at an inherent disadvantage because you are sailing a relatively heavy boat that is slow to accelerate and slow to turn.  With short courses and light or shifting winds, the Portsmouth Yardstick Handicap favors lighter, more nimble boats.  Your advantages are that the boat is stable and likes to sail in straight line.  In addition you can, if the course permits put up a large spinnaker on downwind legs.
Compensating for Disadvantages     There are some things that you can do to compensate and make the Tanzer more competitive against a mixed fleet.  You can begin by participating in as many races as possible.
Show Up at Every Race  You will beat 100 percent of the boats that didn’t show up.  Our season usually starts with 15 – 20 boats on the first night of racing.  By the end of the season—especially if it is raining—we are down to five or six starters.  Our scoring system gives you .75 points for winning a race.  Second place gets 2 points, third place gets 3 points and so on.  At the end of the season the points are added up and the boat with the least points wins.  So, hypothetically let’s say you finish tenth in the first race; you get 10 points.  If you finish last in the last race of the year, you will get 6 points because there were six boats out that night.  All the boats that didn’t sail get seven points.  Even though you were last, you beat 14 boats that didn’t show.  (In our fleet a “did not finish”  (DNF) is one point more than the last boat and a “did not start” (DNS) is one point more than the last boat.  In some fleets a DNS is two points more than the last boat.)
Start on Starboard Tack (even if it’s not favored)   If the lightweight boats like to sit on the line and luff, you can disrupt them by starting on starboard, even when it isn’t favored.  The other boats won’t like you for enforcing your right of way, but they will have to move and that will disrupt their start and give you a small advantage.  BUT make sure you can actually start.  We have had start lines so messed up you couldn’t start on starboard even if you scraped the committee boat.  It doesn’t help you at all to push everyone off the line and then have to do two quick tacks to get a start—There is no such thing as two quick tacks in a Tanzer.

Keep the Boat Moving at the Start    The lightweight boats can afford to luff at the line because they can accelerate quickly.  You can’t do that.  Instead learn to use a flying start.  Many fine articles have been written about this technique. It works like this:  Sail away from the line for half of the remaining time less your time to tack.  Tack.  Sail back to the line—you should be there for the gun.  (Example:  There are three minutes to start and it takes 30 seconds to tack your boat.  3 min – 30 seconds is 2.5 minutes.   Half of 2.5 minutes is 1.25 minutes (75 seconds).  Sail away for 75 seconds, tack, sail back to the line for 75 seconds.  If all goes well, you will be right on time and moving at hull speed.  That’s the hope.)
The Tanzer gibes faster than it tacks to windward.   On light air days it may be faster to gibe than to tack.
Reduce the Number of Tacks on the Upwind Leg    There are many fine articles on racing to windward.  They are mostly right, but you can’t afford the luxury of a tacking duel.  If you find yourself out in front, don’t try to cover the fleet.  Every time you tack you will be giving up time.  You need to try to get to the weather mark in four or less tacks than everyone else.  Granted, this is a gamble.  You could be far away from the rhumb line when the wind shifts—But you could also get a big lift.  In either case, it’s a gamble worth taking.  If you match the lighter boats tack for tack, you will lose. 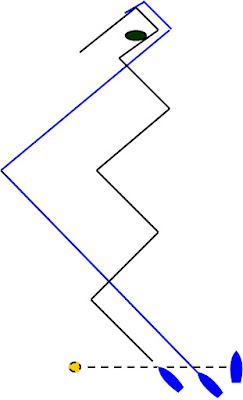 Sail a Broad Reach on the Downwind Leg.  The spinnaker adds lots of sail area and will definitely be an advantage on long downwind legs—it’s not much help on short downwind legs (see above).  Whether your downwind leg is short or long, dead downwind is not a great point of sail for the Tanzer. Tempting as it may be, don’t join the downwind parade; you will be better off if you tack downwind.  The Tanzer performs much better on a broad reach.  So go ahead and gibe once or twice (it does gibe nicely) to gain the additional boat speed.  As an additional advantage, you probably won’t have a boat coming up from behind stealing your wind.
The deck is stacked against you—but so what.    Sailing is fun!  It’s more fun when there are other boats around you jockeying at close quarters for a good start.  Make it your goal to sail crisply and have a good time.  If you win that will be swell, but sailing competently is just about  as satisfying as winning.  jim 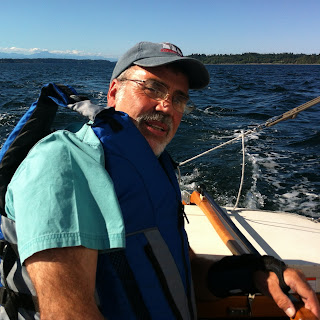