Tanzer 16 Hinged Mast Retrofit and a Name  --  February 25, 2015  Since this is the second time the hinge has been installed into the king post we were able to use what we learned the first time.  The plug tends to squirm around when you try to put the screws through the aluminum tube (formerly a two-foot section of mast) into the oak plug.  This time it was epoxied in place.  The screws will go in tomorrow.  I made a special jig to help with fore-aft alignment.  But, in the end, a tight string and an eyeball did the best job. 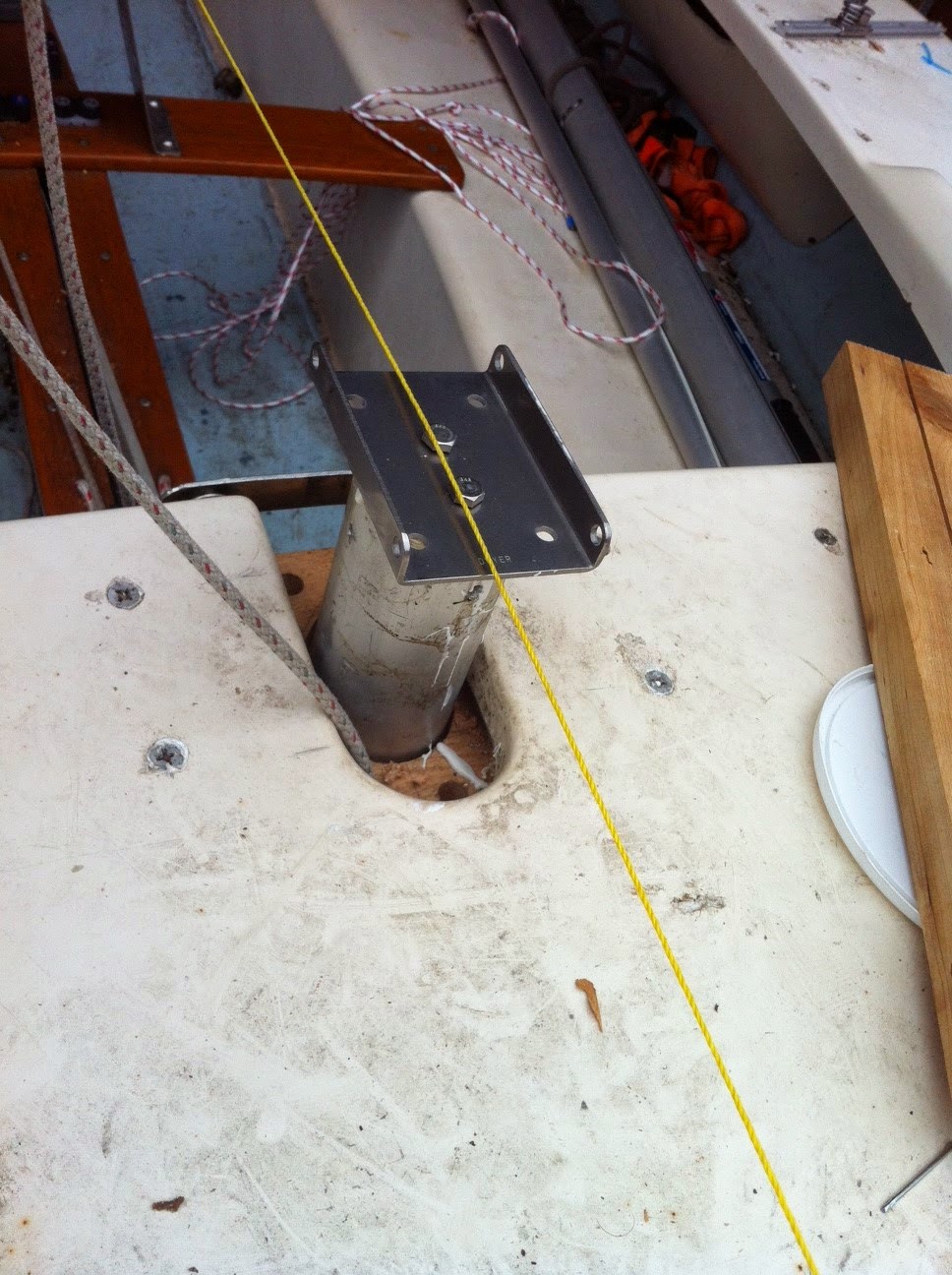 In the afternoon crew Tony came over, and with the help of a little beer, we attached the name graphics to the sides. 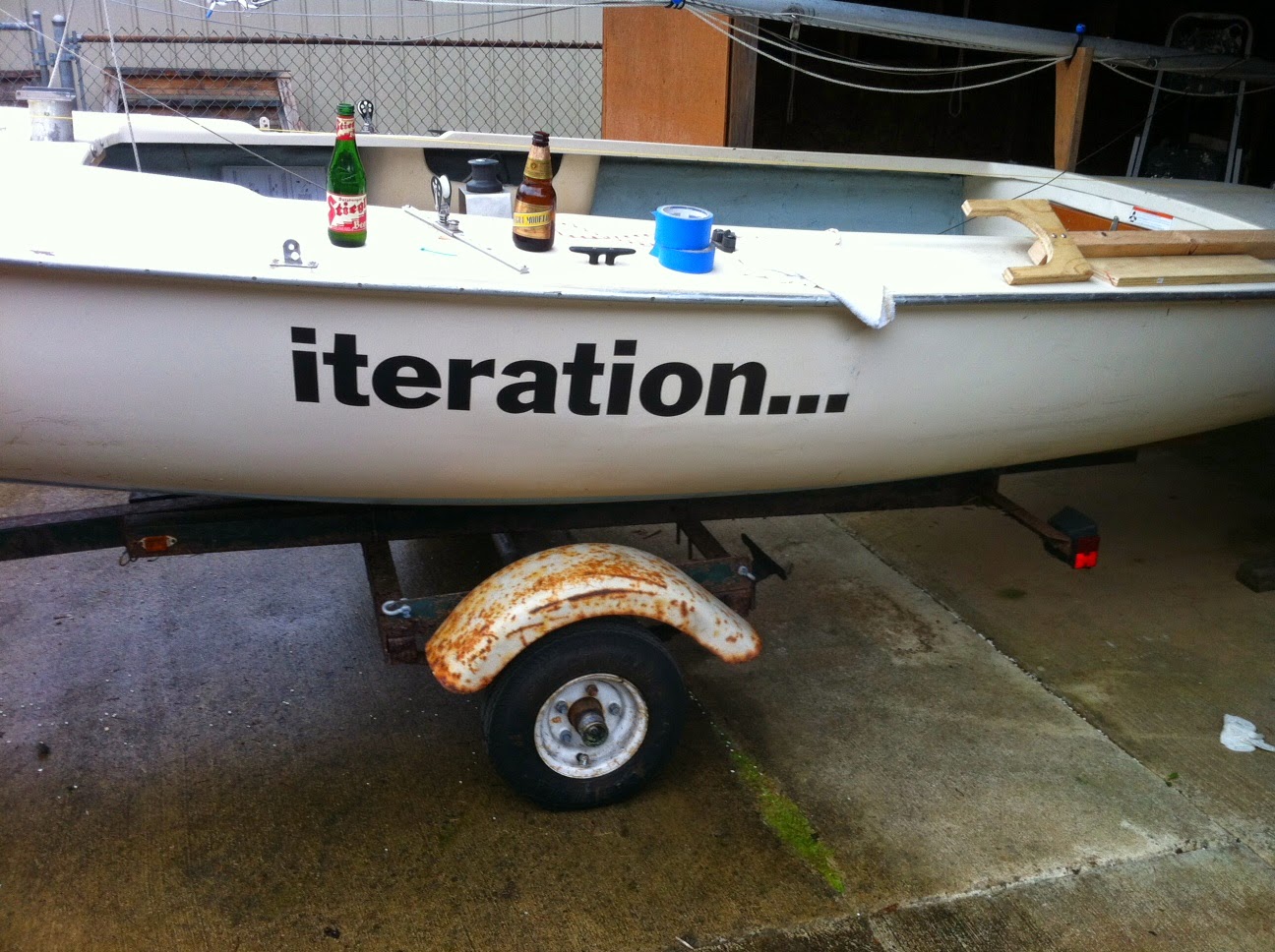 Tanzer 16, Hinged Mast Retrofit Part 14, New Hinge, New Plugs  --  February 23, 2014 -- The new hinge arrived Saturday*.  Sunday morning the plugs were attached; it is ready to go.  Just need a warmer day to install. (I like to use epoxy to hold the plugs in place.  That way they won't shift when you drive the screws.) 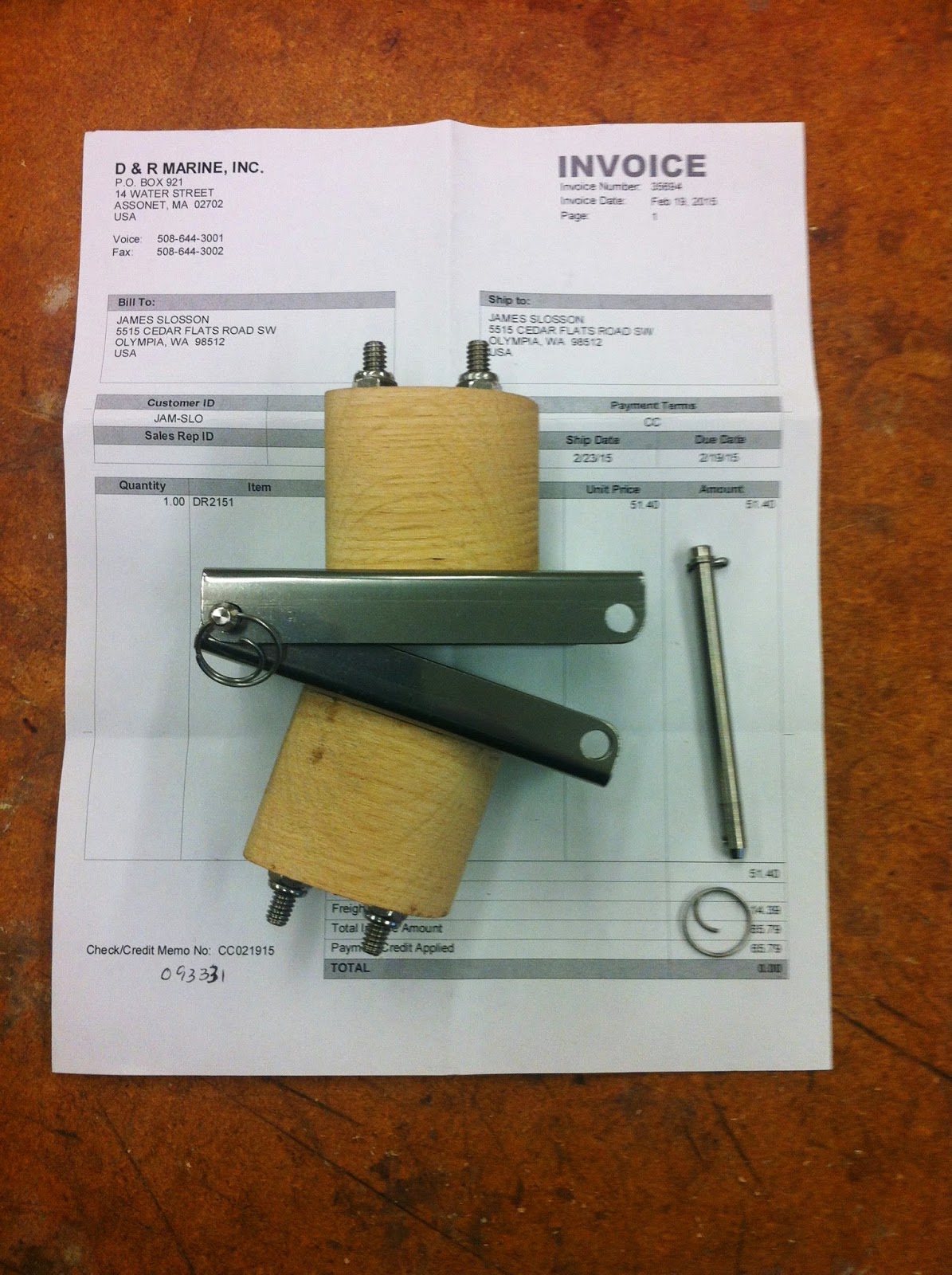 *The hinge was shipped from Boston during the series of snow storms that have plagued the city.  The packing materials inside the box were fliers for snow removal companies.  Some specialized in roofs and some in sidewalks or parking lots.
Posted by Jim at 7:47 AM No comments:

Tanzer 16 Shroud Tensioners - a little more safety -- February 21, 2015  -- The new shroud tensioners seemed a little too complicated and vulnerable even though they are very handy.  So just for safety I stuck a package of wire ties in my fanny pack.  Now we add a tie after the tension has been applied and the safety pin inserted.  In addition the whole mechanism is housed in a plastic pipe that protects the sail and the hardware from each other.  The pipe is actually inch and a half tail piece meant to connect a sink drain. 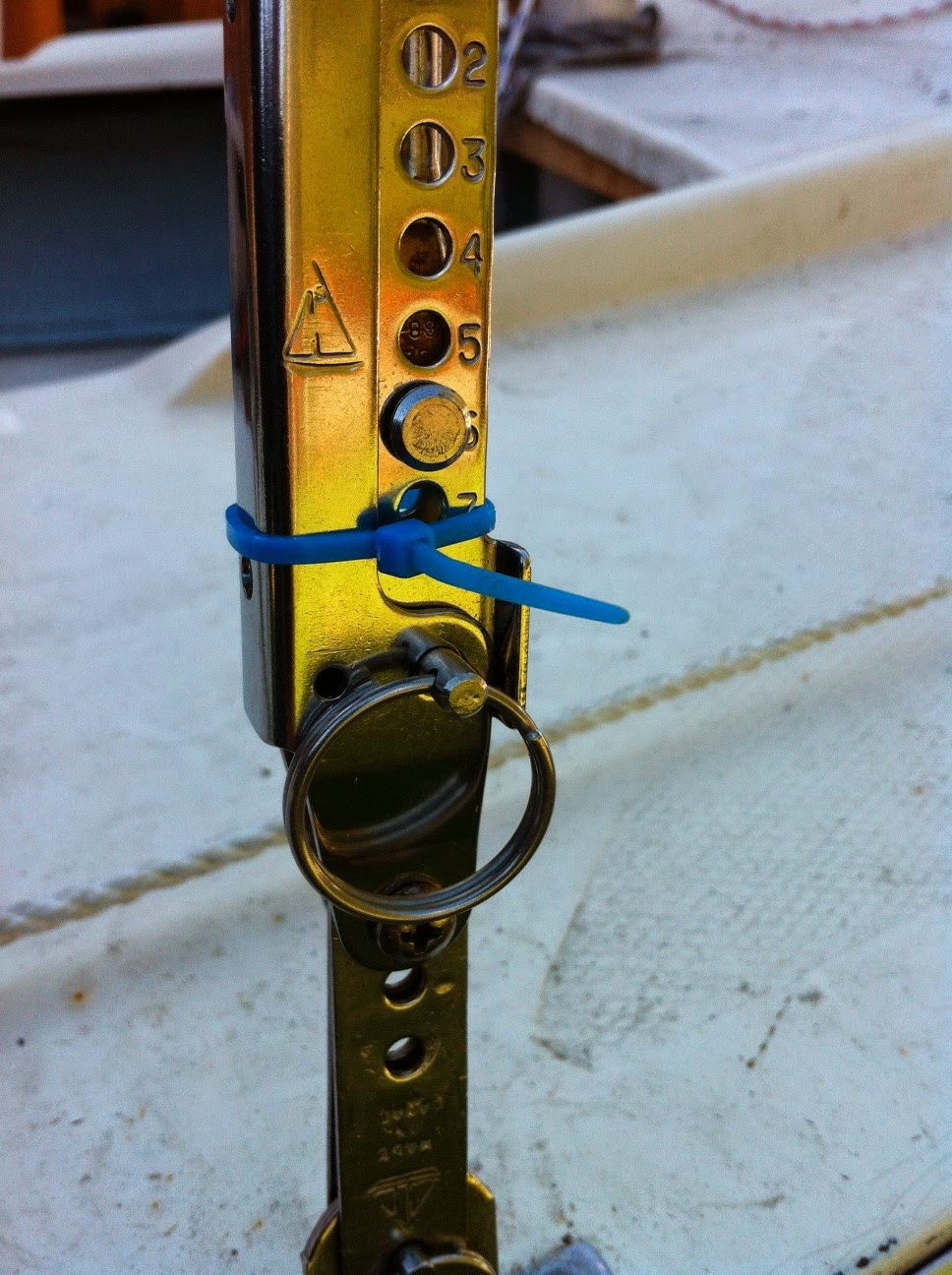 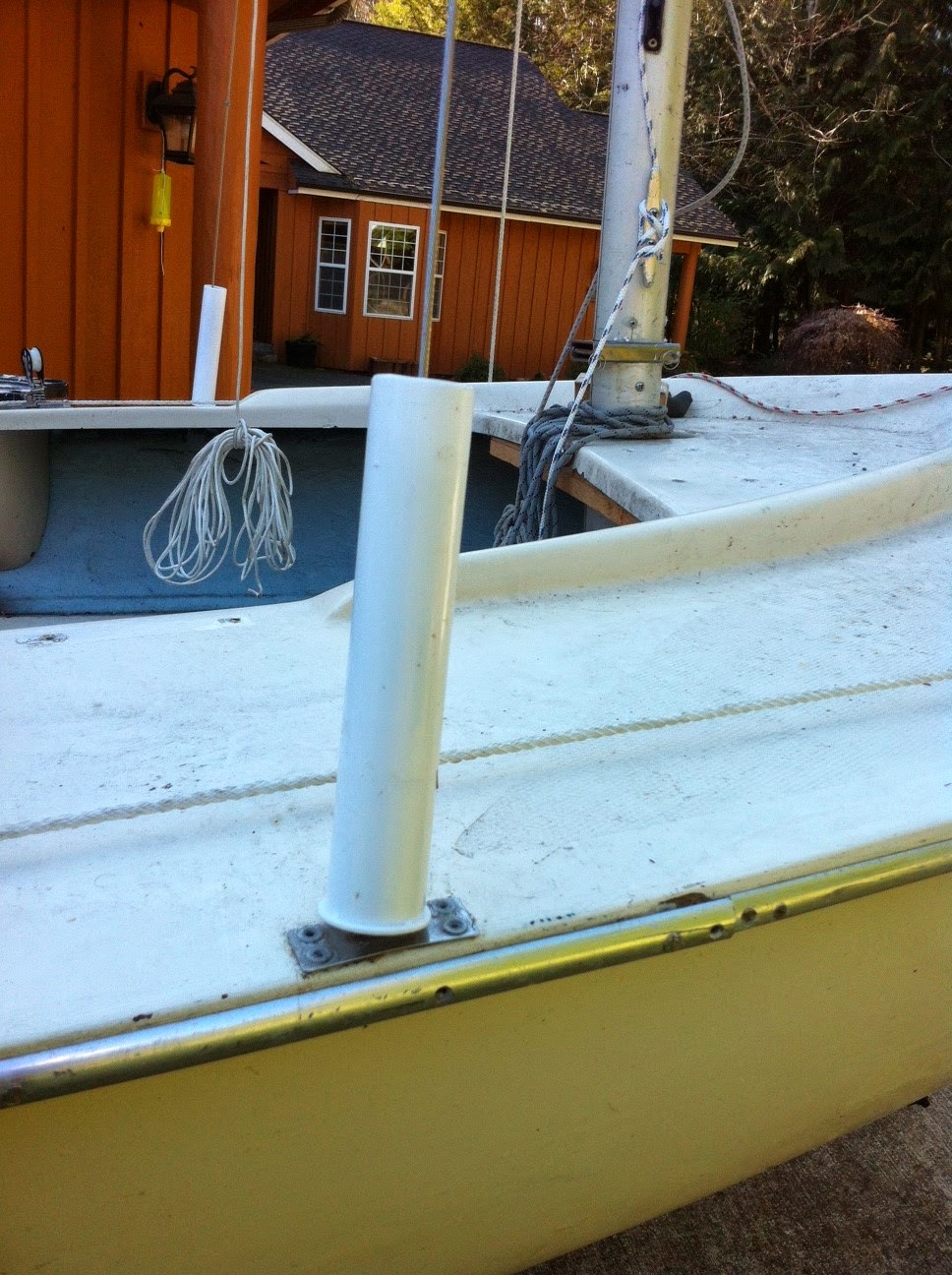 Tanzer 16 Revised Traveler - Boat Named - Finally  -- February 20, 2014  --  Waiting for the new hinge to replace the one bent out of shape by the falling mast.  In the meantime small improvements continue that should make it easier to sail the boat this year.  We want to be more efficient when we race, and I want to make it more convenient to single-hand the boat.

Last year it was difficult to use the traveler when the wind was above 15 knots and almost impossible in 20 knots.  To make it easier we gave the traveler a two-part mechanical advantage by adding a block on the boom.  So it now looks like this. 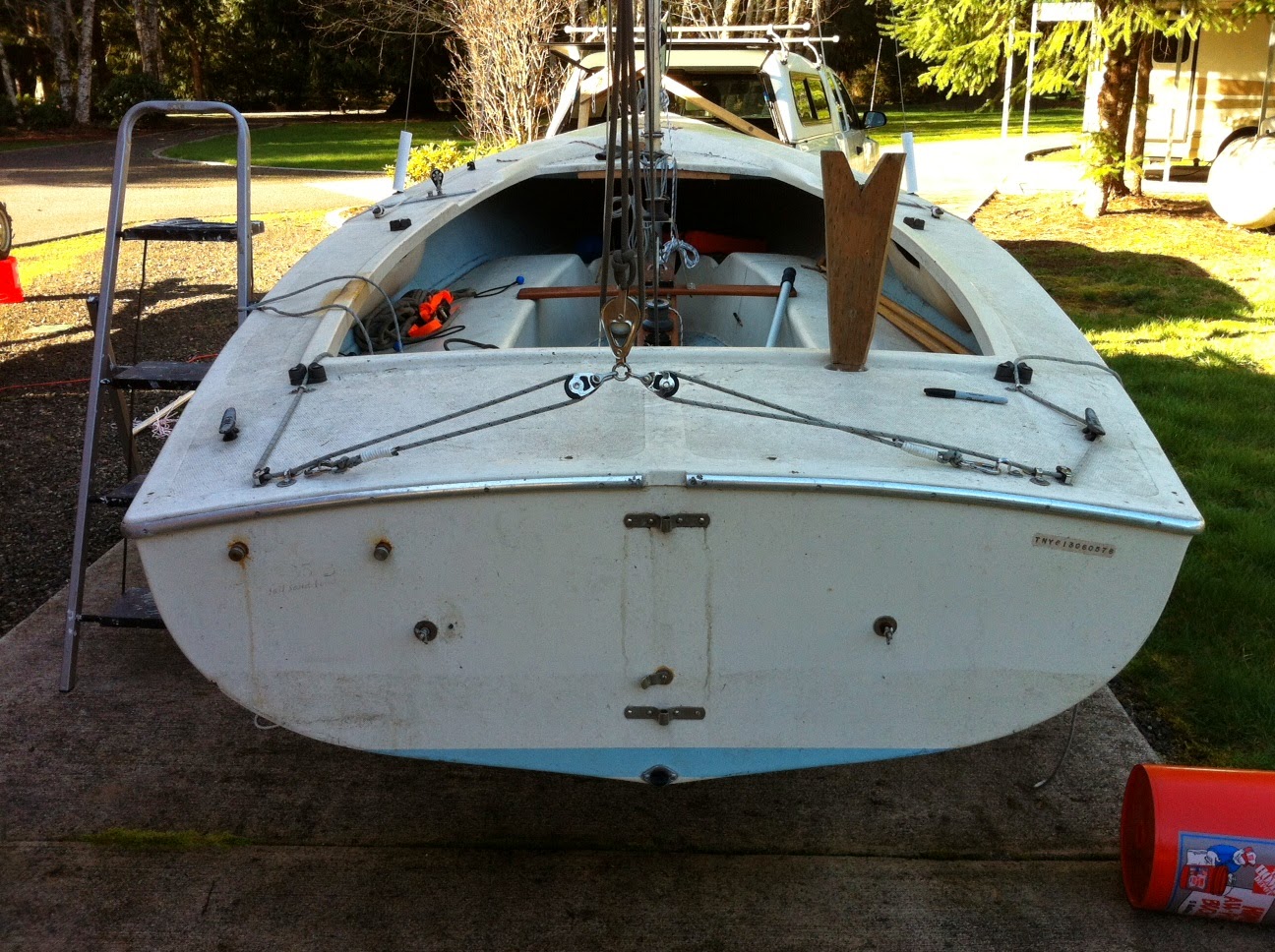 There have been other small improvements, and, as I thought about it, the boat named itself.  My wife had been bugging me for two years to name the boat, and honestly I couldn't think of a name. (She wanted to get some embroidered shirts and hats for Tony and me.)

After two years of tiny improvements, it was quite clear.  The boat wants to be named "iteration...". No capital i.  Block letters.  Since the hull doesn't get painted for two years (deck next year) we'll go ahead and put the name on now.  Something like this:

MAST FAILURE: On the fourth raising the mast hinge failed completely--dramatically.  This pointed out a flaw that I had not detected earlier.  As of today, February 17,  I am in the process of moving the pivot point for the gin pole that should fix the problem.  DO NOT use this method until the change has been made and tested.

At 3:00 am yesterday I started working on the fixes.  The first thing was to make new plugs for the mast.  I was too embarrassed to go back to Ron and tell him that I screwed up all his fine machining so I cut them out with the band saw and cleaned them up with a spindle sander--they will work fine.  Then the gin pole was shortened so that it will fit the new pivot points. 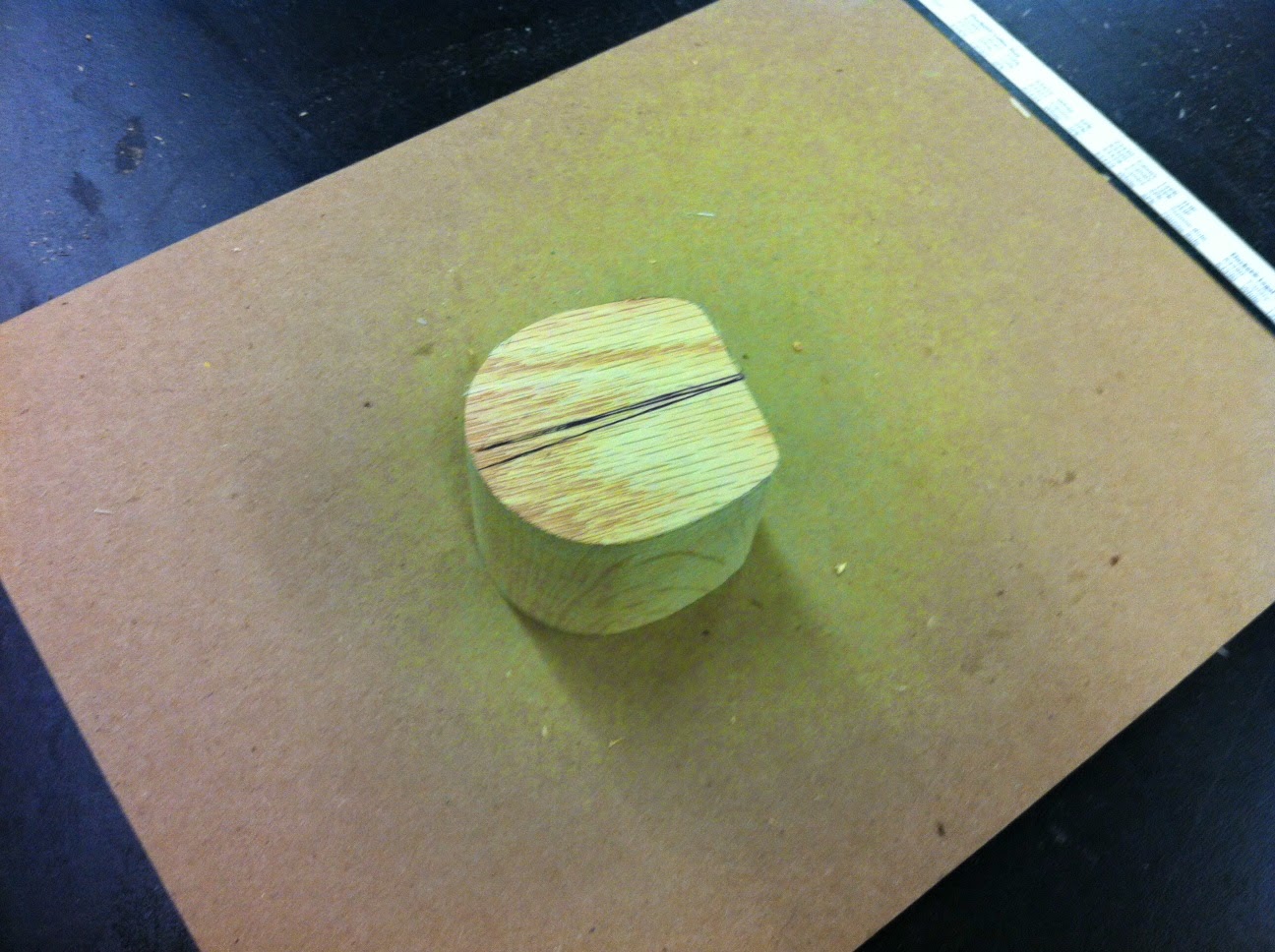 In the latest iteration the shrouds will remain attached to the chainplates -- thus preventing the mast from pitching forward during the lowering process--duh!  Why didn't I think of that in the first place?

The new pivot points will be made out for deck fairleads with a little spacer.  This picture shows the fairleads with spacer and backing plate.  I used high density polyethylene because that's what I had in the scrap box.  The 3/8 bolt will be the pivot axle.  Of course the gin pole legs needed to be shortened and rebored.  The bevel gauge helped keep the drill angled correctly. 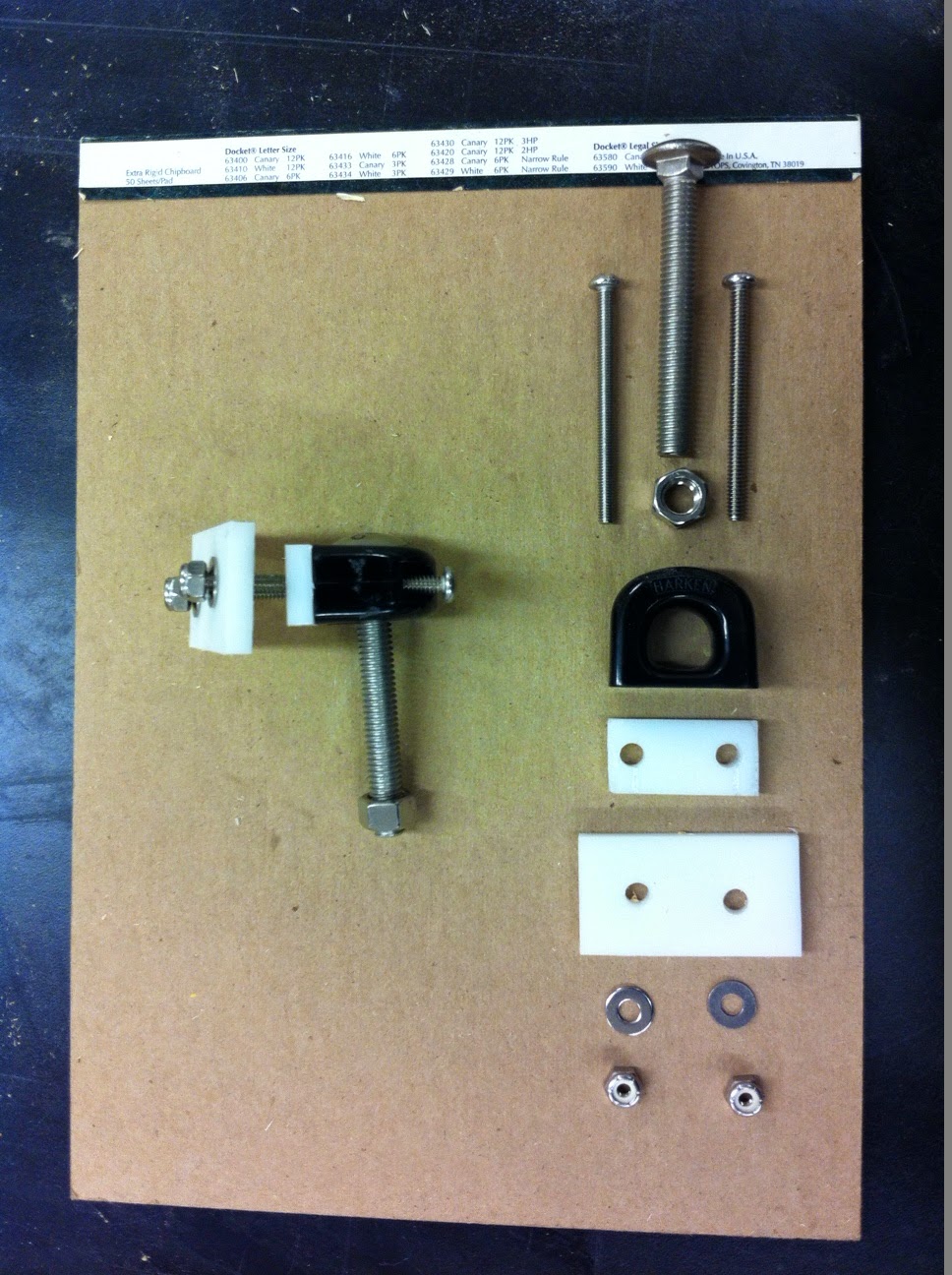 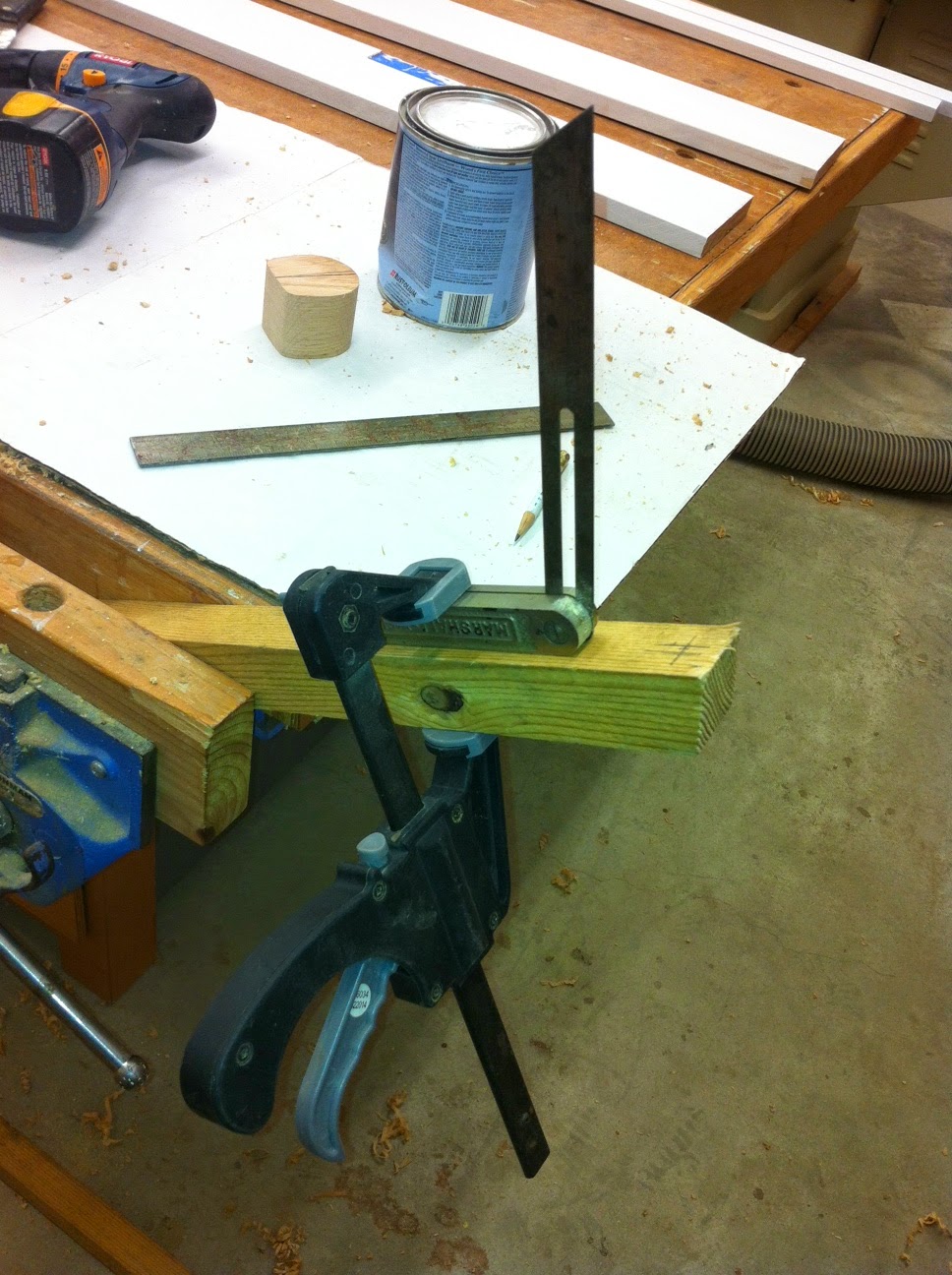 The next task is to get the old plugs out of the mast and the king post.  When the new hinge arrives, we will put it all back together and see how it works.  I keep thinking this is what it will look like if a shroud or the forestay fail while we are out sailing. 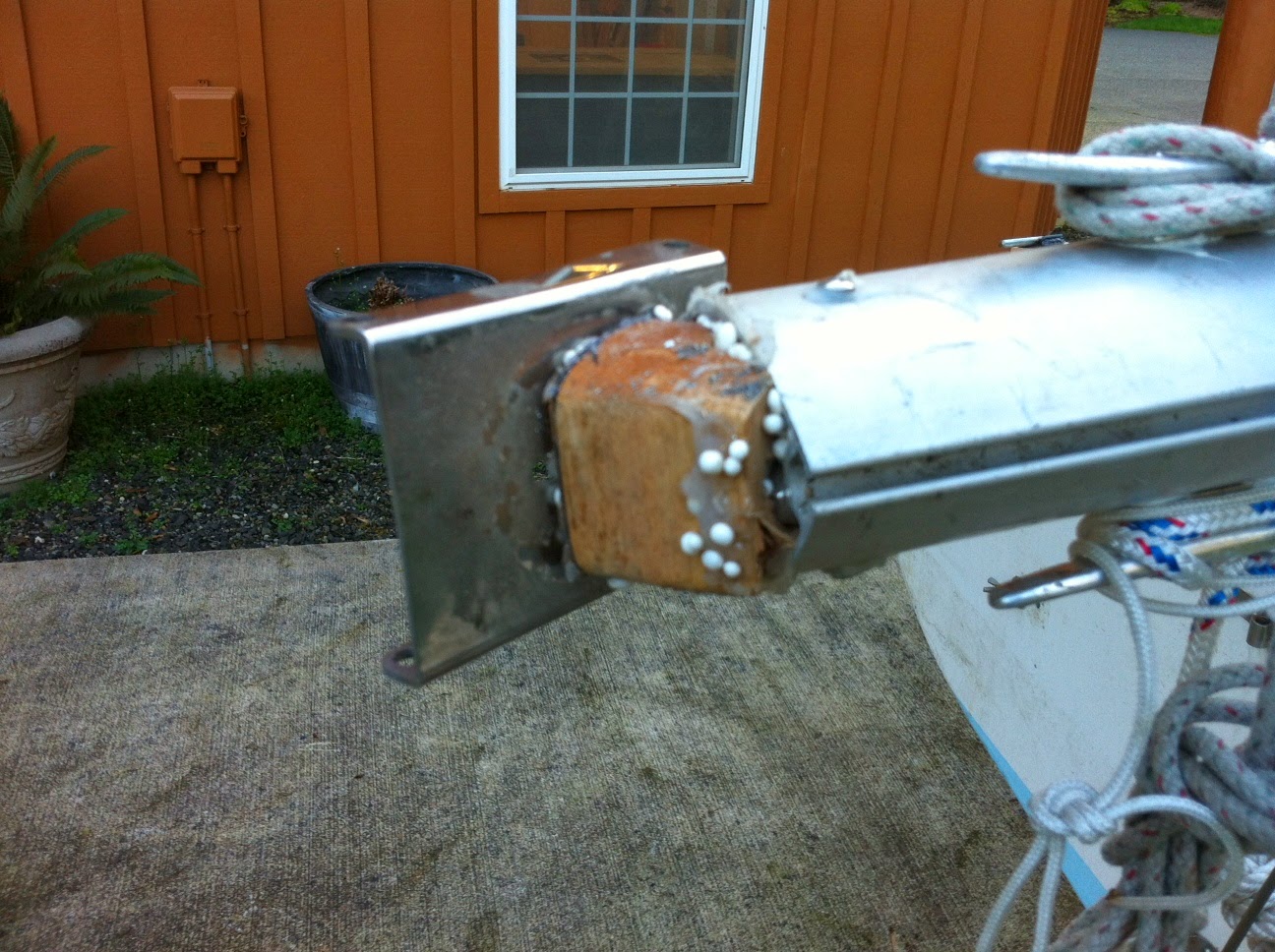 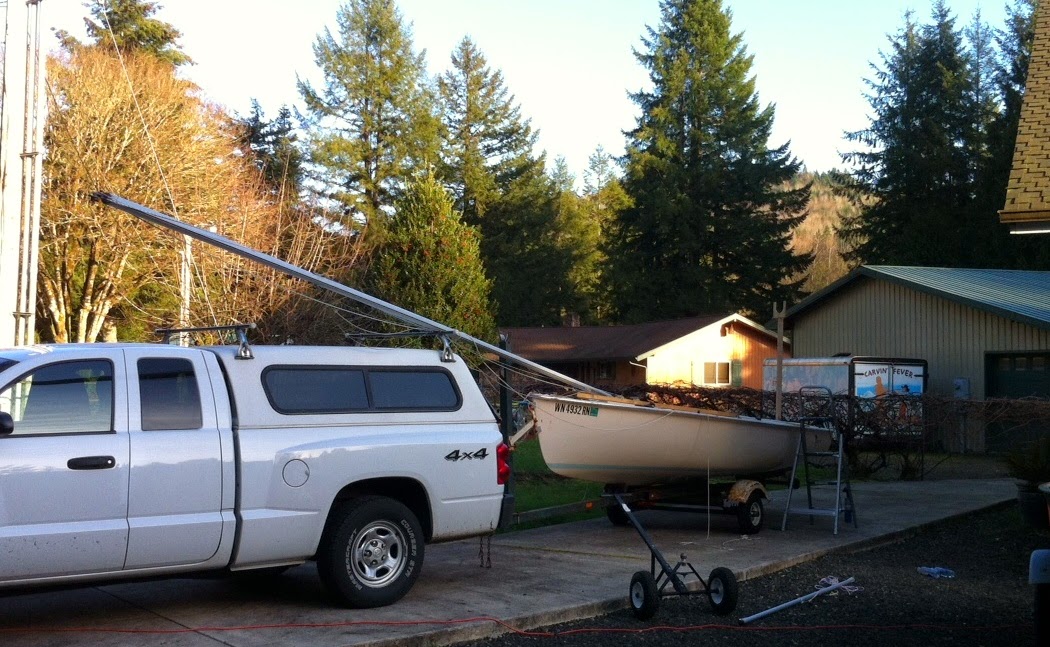 The mast went up smoothly.  Just like the last two times.  Did some work--a lot of work, and it was time to take it down.  After I unhooked the shrouds, it slowly pitched forward and I couldn't hold it.  I opted for a controlled crash to the roof rack on the pick-up.  The mast isn't hurt. I wasn't hurt.  The hinge failed catastrophically.  Thank goodness we had used wood plugs.  They failed and didn't hurt the mast.  If they had been aluminium castings, the mast would have been ruined.

So what went wrong?  As I sat and had a Jack Daniels, I realized that when I released the shrouds there was no back pressure on the mast.It just decided to rock forward.  I was just lucky the first two times.  So, What to do.  I am not going back to the old system.

I have already ordered a new hinge from DR Marine.  We need to move the pivot point of the A-frame forward so the shrouds can be hooked into the chainplates at all times.  I already have a plan for this.

Really this was a lucky mistake.  We discovered a major flaw.  It happened on a dry sunny afternoon in the driveway--not a cold, dark, rainy night at the marina.  Nobody was hurt.  The mast and truck are fine--me too.  And the next iteration will be much better.  And -- We still have the original mast hanging in the overhead of the carport.

The fixes should be ready in about two weeks.  Plenty of time before the first race--I hope.  When this is repaired I'll show the improved traveler.

Tanzer 16 - Overnighter 16 Hinges  -- February 10, 2015  I was looking through the pictures Jon sent me--he is the St. Petersburg, Florida guy rehabbing the overnighter.  He sent a picture of the his mast hinge on the Overnighter.  I wanted a comparison with the one we fabricated for my Tanzer 16 during the change over to a hinged mast step.

Facebook group/forum is open for business as Tanzer 16/Overnighter Group.  Hoping to see pictures and read stories about your experiences in Tanzers.  Of course we would like hear from others who enjoy sailing and racing small boats.  Very interested in seeing your particular rigging refinements and hearing your refurb stories.  Also interested in knowing your location and hull number and of course a picture of you in your boat would be nice.  jim