Tanzer 16 finding 43 seconds--racing in a mixed fleet -- July 30, 2015 --  On a Thursday evening usually have three and sometimes four races between 1830 and 2030.  Kevin never misses a race, and Kevin makes dinghy racing look easy in his Harpoon 5.2.  He regularly finishes every race in the top three.  He drinks a beer and smokes a cigarette while tends his spinnaker.  He often single hands.  He is pretty darn good.  I include this description of Kevin because the other day he beat us by 43 seconds in a 30 minute race.

Tony and I have continued to improve our racing skills. The last few races we did not finish last in any single race, and the fleet was pretty tight.   But we need to find another 43 seconds of improvement if we want to be in the top third of the fleet—that’s doable.  We need to clean up some things that cost us seconds and we need a strategy that fits our boat.

Tacking time.  Depending on the wind, Kevin can tack his boat in 7 -10 seconds less time than we can tack the Tanzer.  If we can eliminate two tacks upwind, we gain 14-20 seconds of the 43 we need.  This is manageable.  We need to be mindful of the wind patterns and try to hold tacks longer.  We need to try and avoid tacking duels; we can’t win those—especially against the lighter boats like the Cornnados and Lidos.
For our boat it is better to overstand the windward mark than to risk the time it would take to short tack twice at the mark.

Sail Choice.  In winds above seven knots we need to use the small jib instead of the Genoa.  The Tanzer carries a lot of sail for 16-foot boat.  When the wind reaches 10 or 12 knots with the Genoa up,  we spend too much time spilling air just to keep the boat upright. (We are too old to hike harder—steel pins in ankles and rebuilt knees.)  We have gotten pretty adept at pumping to point a bit higher as the gusts ease, but it still costs us time and energy.  Better sail choices could give us 10 – 20 seconds in some races.

In winds over 12 knots, we should reef the main and use the small jib.  In the higher winds too much sail slows us down and costs us a few degrees of progress to windward.
If we get better with practice, it would be helpful to use the Spinnaker on the downwind legs. It is a lot of mucking about on a very small foredeck, but there are times when it would have given us 10 seconds or so on the downwind leg.  It would help even more when we get the rare reaching leg.

Rigging issues.   Now and then we have little rigging issues that cost us seconds.  The main sheets can get hung up on the aft mooring cleats.  We moved them 10 inches forward.   We had too many things attached to the spinnaker pole rig and had to fight that occasionally.  We added another ring above.  The vang would be in the way when Tony tries to change sides of the boat.  We now store it on a hook and only set it up when we need to on the downwind legs.  I was spending too much time messing with the traveler, and it was distracting me from sailing fast upwind.  Now we just leave the traveler in the middle until we are on a long windward leg.

Starts.  We need to recognize that we are not as nimble as the other boats during the start.  We need to find a good line—not necessarily the best line and get a decent start—not necessarily a great—start.  We are thinking something like sail away from the line for 30 seconds when there are two minutes to go.  Commence our tack at 1:30 to go.  This should put us a little less than one minute away from the start.  Then we can luff a bit and lay behind the Lasers that like to sit in a pack just luffing.  The nice thing about them is that they accelerate away from the line quickly and leave you sitting in pretty clean air.  (Or maybe we should just follow Jim in his Lido.  He always gets a great start.)

So there it is.  There are 43 seconds to be found.  By the end of this season we should be able to move up a few places—but I doubt that we will be drinking any beer until the races are over for the day.  We’ll see how we do this evening!
Posted by Jim at 9:24 AM No comments:

Tanzer 16 -- A little cruise up Budd Inlet  --  July 23, 2015  Truth is I only bought the Tanzer to race on Thursday nights.  But it has been such a nice little boat that Tony and I decided we need to go out just to poop around Budd Inlet.  It is a couple miles wide and about six miles from the Marina to the light on Doffelmeyer Point at Boston Harbor.

Our racing is mostly confined to the southern portion--an area of less than 4 square miles so this was a nice chance to kick back, drink a beer, and see what the wind wanted to do.  The Tanzer turned out to be an excellent little daysailer.  Plenty of room for two or three adults--four would really be pushing it.  We enjoyed a light southerly wind all the way out and even hoisted the spinnaker.  With only 1-5 knots of wind the sail was easy to handle, and just for fun, we practiced gibing.  A couple of harbor seals kept us company.

Talk about lucky.  The wind died; we ate lunch; the wind filled in from the east.  Two tacks to travel six miles on a close reach.  We only used the motor to dock because we could--we almost always sail into the docks.  A good day; a good little daysailer.  Easy to handle and roomy.

So we set up some hardware as shown on the Tanzer 16 association web site.  It wasn't cheap, but not exorbitant by boating standards. (A couple hundred bucks all in, blocks, cleats, topping lift and halyard.)  I already had a spinnaker pole we used for the Genoa down wind.

As I installed the hardware, it was easy to see that #1306 had a spinnaker in its past.  Since neither Tony nor I know anything about spinnakers we thought we would try it in the driveway first.  Much easier to pick up a dropped pole off concrete than from Budd Inlet.

So we got it up.  Got it down, Put it up gybed it a time or two.  Maybe we are ready to try it on the water, but it will be a long time before we use it in a race.  We'll see.  If it does happen, we'll have sharp knives in our pockets and no stopper knots on the sheets. 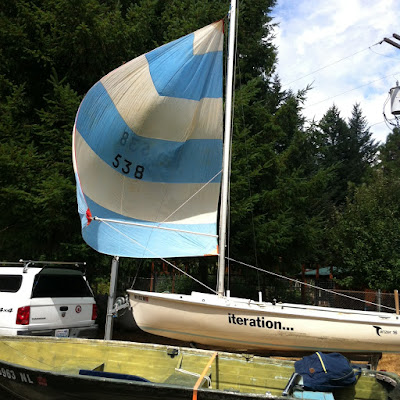 *At one point Tanzers were being built in Quebec, South Carolina and Washington.  That accounts for the unusual number of Overnighters for sale on the Seattle Craig's list.  They all seem to have numbers in the 400 and 500 range.
Posted by Jim at 6:06 AM No comments:

Tanzer 16 powered by 2 hp Honda outboard -- July 17, 2014  We've been struggling with the engine issue for about a year.  Originally I picked up a Tohatsu 2 hp.  It works well, and I use it on my 12-foot fishing boat, but it really wasn't a good fit for the Tanzer 16.  It's just too heavy; my short-shaft comes in at about 41 pounds. The Honda weighs 29 pounds--and a pound more in the long shaft version.

Too bad the EPA outlawed two-stroke engines.  I could have found one of those at 19 pounds.  Oh well,  Couldn't find a used 2-stroke; bought the Honda.


Truth is, it's still too heavy for racing--especially in light air.  It adds extra weight and it messes up the trim of the boat making it even harder to get weight forward when beating.  We leave it and the anchor home when we're racing.  BUT

Today we went for a cruise with my daughter and grandson who don't know how to sail and the engine worked very well.  When they were ready to go, we motored in at hull speed.

It doesn't have a transmission.  It is direct drive with a centrifugal clutch.  So it will idle down and not move forward--mostly.  If you want to back it up, spin the motor around.

It starts easily--unless you leave it tipped up for a long time.  I forgot to close the vent cap so it acted like it was flooded.  After I gave up and decided to sail into the slip it started easily on the "oh-what-the-heck" effort.

It is pretty quiet--for an air cooled engine.  The exhaust does go into the water.

The long shaft is a little bit of overkill for the Tanzer, but that's okay we hit some big wakes and the transom was kind of in the air, but the prop was in the water.

Cost--I bought mine on a factory supported sale.  And, I bought last years's model (2-hp) and saved another $250 bucks so I was out the door for just a shade over $900 with tax.

Fuel--This little motor is a miser. But given the tiny little jets mandated by the EPA and the ability of 10% ethanol gas you have the perfect situation for carb problems.  Use ethanol free gas.  Add stabilizer.  Run the engine dry after every use.  As it starts to sputter, pull out the choke.  At the end of the season drain all of the gas.  Hint:  If you have to pull out the choke to keep it running, the carb needs to be cleaned.

Tanzer 16 -- There is another Tanzer -- #1304 -- July 12, 2015  It was my turn to work the committee boat on July 2--beautiful day, light to moderate winds--great for pictures which were easy since my job was recording finish times.  I finally got to see the other Tanzer.  People told me there was another, but we have never been on the water at the same time.  We only chatted a moment and both hope to see each other on the race course soon. Their boat is much nicer looking than mine. Right now Iteration, #1306, needs paint.  Maybe now I will have incentive to make my boat more than a weather-worn-platform for the attachment of expensive hardware.   Pictures are also posted on facebook:  Tanzer 16 Dinghy Sailors. 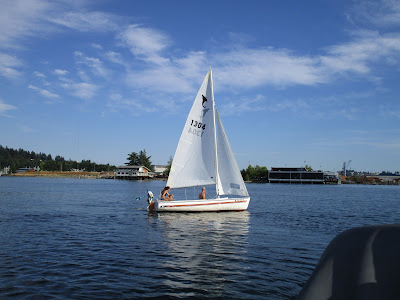 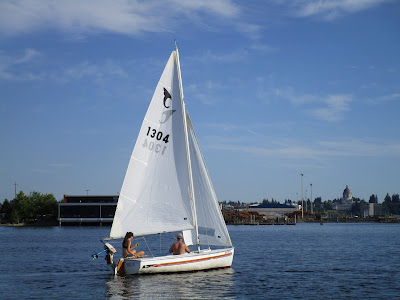 Tanzer 16--Spinnaker Halyard Relocate--New Outboard -- July 7, 2015  Crew Tony asked that the spinnaker halyard and topping lift move in closer to the centerboard trunk.  Previously they were mounted on the bottom of the thwart.  After much messing about I decided to try putting them on the inside of the snubbing winch pedestal.  You could not do this on the factory-made pedestal because it sits on four legs (or in another version it has large ridges that get in the way).  The bent sheet metal provides plenty of surface area.  We'll see how it works.