They left St. Pete's Beach (at the mouth of Tampa Bay) at 0800 EST.  The weather was sunny varying to mostly sunny.  The winds varied during the day 3 to 7 knots from the NW and NE so presumably he got to use a spinnaker much of the day.  He sailed a pretty straight course to the SSW. 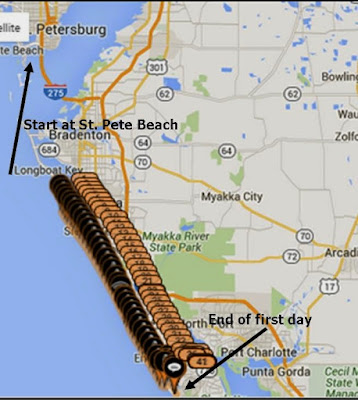 In 12 hours they made 43 nautical miles of the challenge's 300-mile course to Key Largo.  They stopped for the night at the northern end of Don Pedro Island.

He has seven more days to complete the course.  As of 0845 EST he has not moved from his overnight position.  From the chart, it looks as though he will head down a narrow channel and continue south.  I will track Brian and his crew and they continue.  Sunday's weather is supposed to be sunny (0% rain).  Temperatures should be in the 70's.  Most importantly the wind is predicted to come from the NNE at 12 mph.  If all that is true, Brian should have another good day.