Tanzer 16 in heavy wind, and a compass

Tanzer 16 in heavy wind, and a compass -- June 20, 2015 -- Two weeks ago we sailed in very light air and commented that the boat was kind of a slug.  This week we went out in some much heavier air.  When summer's afternoon winds blow from the west it can be exciting.  The forecast said 10 to 20, but it was a steady 15 and gusts over 20.  Budd Inlet narrows down at the southern end so the waves don't have room to build--lucky for us. 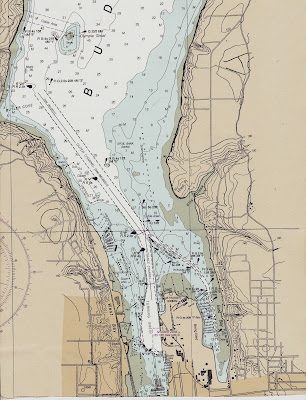 We left the dock with the small jib and a reefed main and spent an hour or so close hauled on the eastern side of the bay. (I was hoping my wife, Pat,  could take our picture.  We would be the tiny speck on the water--oh well.)   It seems 15 knots is plenty of wind.  With each gust over 20, and there were many, we had to spill wind.  At this point we especially appreciated Johann Tanzer's design. The wide, rounded hull provides plenty of buoyancy. But still we needed to be conservative.  Tony's 61, I'm 68, Puget Sound's waters are 58 degrees, and help, if it came at all, would be more than an hour away.  Hypothermia is the big worry here.

Other folks must have been worried about the wind too.  Ten minutes before the start we were the only boat out there. Four other boats joined us for the start--the best sailors in the fleet--well the four best and us.*  The wind, being the wind, started dropping before we reached the weather mark.  We got hosed because of our reduced sail and shook out the reef on the downwind leg.  By the time we reached the committee boat to start the second lap we wished I had not left the Genoa in the truck.

The new compass was helpful.  (It replaces the hiking compass we tried out two weeks ago.  It too was helpful, but the paper dial delaminated after one session on the water. 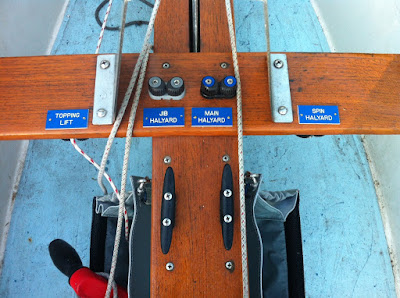 As you can see the centerboard trunk area is getting pretty full.  All three halyards and the topping lift can be controlled from the helmsman's position.  The idea is that you winch the jib and main halyards through the cam cleats.  When the tension is right each one gets secured on its own cleat.  There are cam cleats with fairleads under the thwart.  Above all that is the snubbing winch pedestal for the jib sheets.  Behind all this you find the halyard winch, the centerboard cleat, the compass, and the mainsheet block.  On either side of the truck we have pouches to hold the halyard tails.  All of the lines can be operated from the aft end of the cockpit.

So theoretically, I can single hand the boat--but not in 20 knots of wind thank you.

Tanzer 16 --Kind of a slug in light air --June 13, 2015 --  200 yards from the finish on the downwind leg.  Just a whisper of wind; the Coronado 15 comes up from behind just ghosts past us to finish ahead.*  They have less sail area, but they also weigh about 200 pounds less.  The actual difference is probably greater.  The Tanzer is required to weigh at least 425 pounds before you add mast, boom, rudder, people, sails, paddles, bucket, throwable, et al.  That's the class rule.

The Tanzer performs really well in winds of five to twelve knots.  She is plenty safe up to 18 knots as long as the waves aren't too big.**  Probably safe in stronger winds, but we haven't tried it.

On the windward legs in light air we add heel and move our weight forward to reduce wetted surface. We move slowly and steer gently.  We keep the sails loose.  But in very light air, the Tanzer 16 is just kind of a slug.

We have noted this before, but during this evening of four races, we got to see her right next to lighter and heavier boats.  Here's what we discovered.  Remember we have a clean bottom, brand new sails, and our seamanship should probably be rated as G  (good -- probably the low end of good --somewhat better than fair but not excellent).

In light air we could only sail about 50 degrees into the wind.  We couldn't hit 45 degrees, but we pointed as well as everybody else.  We went out on the course three hours early so we could experiment with all kinds of tweeks moving the traveler and jib car positions.  But 50 degrees by the compass-- that was about the best we could get.  (In this particular race all of the windward marks put us directly against a 2-3 knot current flowing toward the committee boat.  That cost us another five degrees or so of pointing angle.)

In moderate air and especially in light air, the Tanzer doesn't like to make the turn through the wind. Tony has become very proficient in using the jib to push our bow over when we tack.  It looks like this when we change from port to starboard tack. 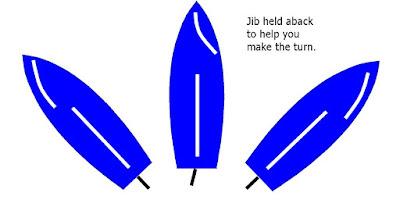 It's easy to over-steer when tacking and of course that just slows the boat down even more.  Using the jib helps you use less helm through the tack.  After about 30 races we have this maneuver down so we are smooth.  Lately I have been more careful about adjusting our course for the next leg. Knowing that 50 degrees is our max has proved helpful. (So did adding a compass.) Including an allowance for current has also meant one or two less tacks as we near the mark.

Even with backwinding the jib, it is easy to get into irons in light air.  Isn't that just fun to sit there unable to move at all while the other boats slip past you!  In one race when the wind varied between two and zero we tried gybing to tack.  It worked--sort of--certainly better than tacking.

So--the race.  We did okay finishing 13 out of 16.  Lots of Lasers in this fleet.  Definitely wished we had that spinnaker ready to go.  What do you need for light air racing in a Tanzer 16?  Patience and some cold beer.

* The Coronado owed us some time so we did actually beat them.
** We have actually sailed this boat in 15+ conditions with occasional gusts over 20, but we had three people in the boat that day.  I think it would have handled that wind better with a reefed main. We could have kept her standing up straighter and spent less time spilling wind.  Also on that day the wind was stiff, but it came across the short side of the bay so there wasn't enough fetch for the waves to build.  I have a feeling that beating into waves is not going to be a good deal in this boat.  Maybe that's why they call it sailing instead of arriving.
Posted by Jim at 8:30 PM No comments:

Received a nice update from Phil Hopewell.  He is the guy that sent us the nice PDF of the Tanzer plans. 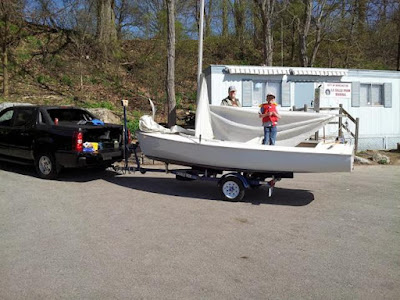 I am always amazed at what people can accomplish when restoring these fine old boats.  Previous owners that stored the boats where water could collect in the hull caused most of the damage.   Water finds its way through the glass to areas were plywood was part of the structure.  The floor and transom (and sometimes the deck) are frequently problems.  Here is how Phil Hopewell handled a transom situation.  jim

I ponied up the money for a nice new Yamaha 2.5 hp at the boat show last year. It worked really well but the transom was flexing every time I tilted the motor up, and I was worried the bolts that hold the outboard bracket might pull right out. I figured that area of the wood backing might be rotten but the more I dug at it last fall, I found the rot extended to the area around the gudgeons too, so I removed all the wood backing.

With the boat outside, I was dependent on the weather. I wanted to remove all of the old wet wood before winter to give it a good chance to dry. The access to the transom on the Tanzer 16 is not very good as you know, with the small opening having a sharp edge all around it. I found an old piece of carpet to lie on eased the pain that sharp edge caused on my shoulders and chest.

With the warmer weather this spring, I was able to press on with final grinding and fitting of the new pieces of marine grade ply using CAD technology (cardboard-aided-design).  I wasn't able to make it in one piece like the original, but took the opportunity to make the piece behind the outboard bigger as a result. I used thickened West system epoxy to attach the pieces to the transom and create a nice round fillet at the top. I also cut out the old serial number that was in the transom and glued it in place as well.

Then disaster struck. I had the fibreglass all cut out and had mixed up a medium sized batch of epoxy and started to apply the first layer of cloth, however, the darned stuff just would not stay in place. I just could not get enough of the cloth wetted out before the weight of the remaining pulled the whole thing down. I tried stapling to no avail. Meanwhile my expensive pot of epoxy got hot and hardened to rock. I quickly regrouped and tried cutting the cloth in four pieces. Success! I was now able to apply four smaller pieces, overlapping them, of course, and carry on with two layers.

After a couple of weeks of drying, I painted the whole inside of the transom with marine epoxy and re-installed the hardware with a good coating of Sikaflex.

The outboard now sits firmly on the stern and the flex is now gone from the transom. We hope to go on our first sail of the season next weekend. 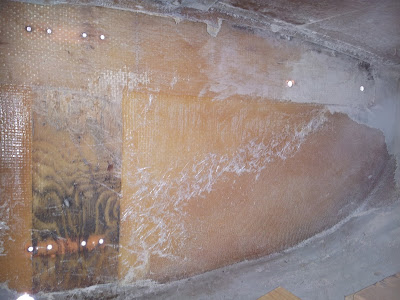 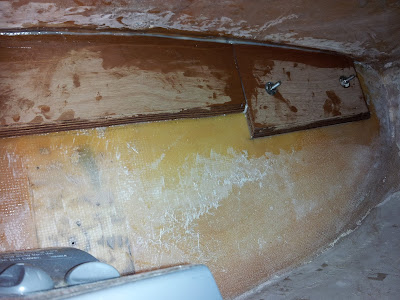 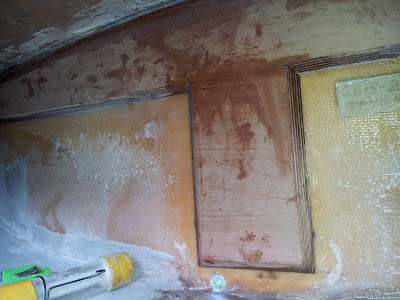 Tanzer 16 -- The perfect outboard for small sailboats--almost --June 5, 2015  I am not generally a covetous person.  But I have to admit.  I want one of these fancy lithium ion battery outboards. Saw it in person last night for the first time.  There was almost no wind.  Yet a Lido 14 came screaming out of the marina throwing a bow wave and a wake.  Clearly it had reached hull speed and then some.
No smoke.  No noise. Just the slap of water.  Yeah he had it.  This outboard. 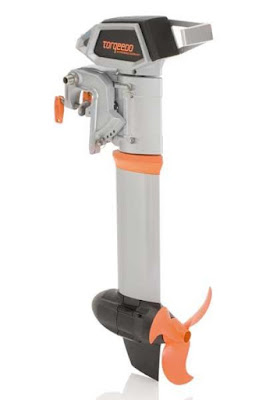 It only weighs 20 pounds.  It makes no noise.  There is no lead acid battery knocking around in the bilge.  It has a long shaft.  Could only find one negative.