Here is the information I sent him.


Hi Brian:  Now that I look at it closely, I am not 100% sure this is a factory oarlock.  Usually Tanzer hardware says made in Canada.  In any case this oar lock is 25" behind the jibsheet rail and 3" inside along the nonskid. 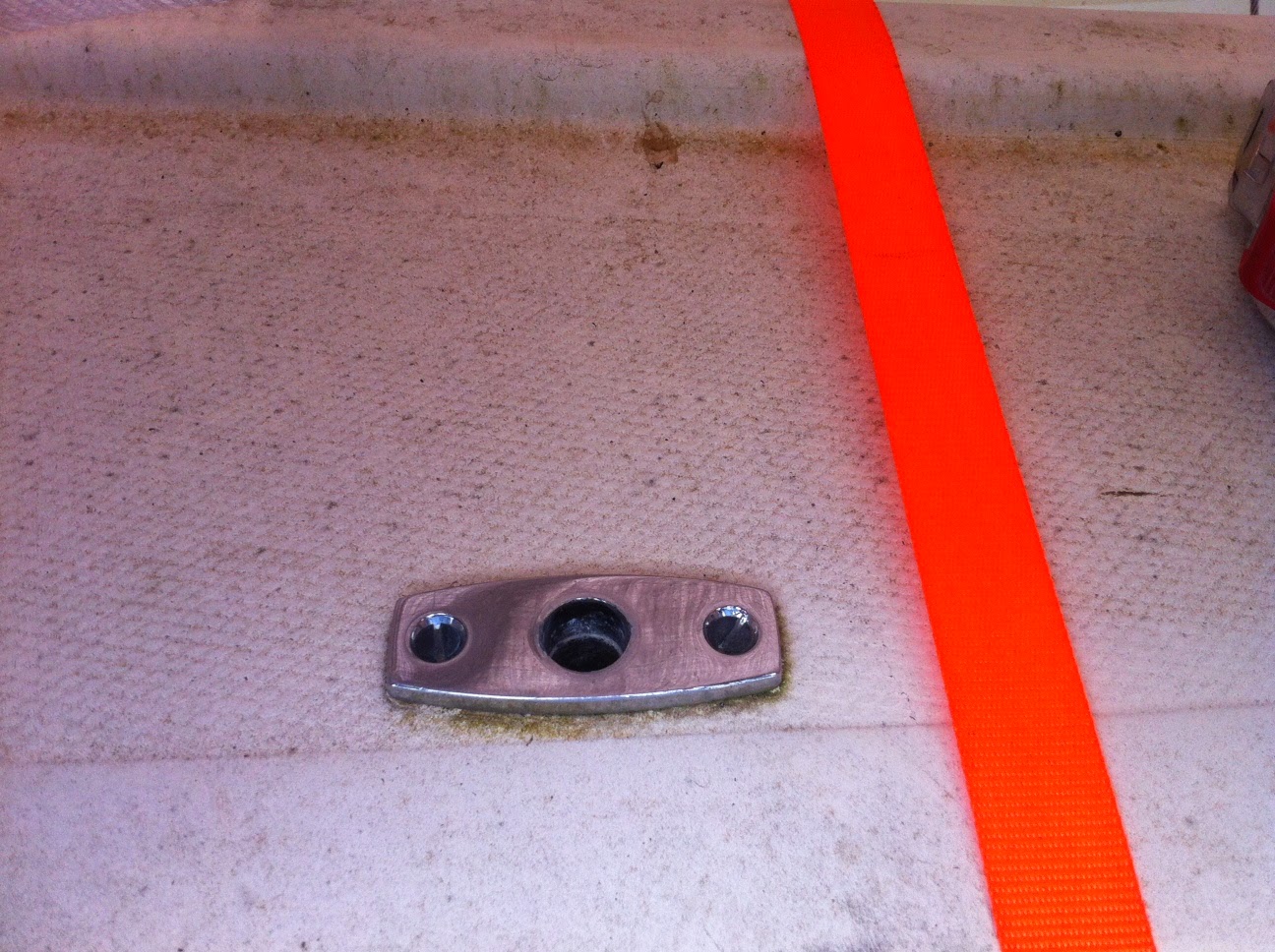 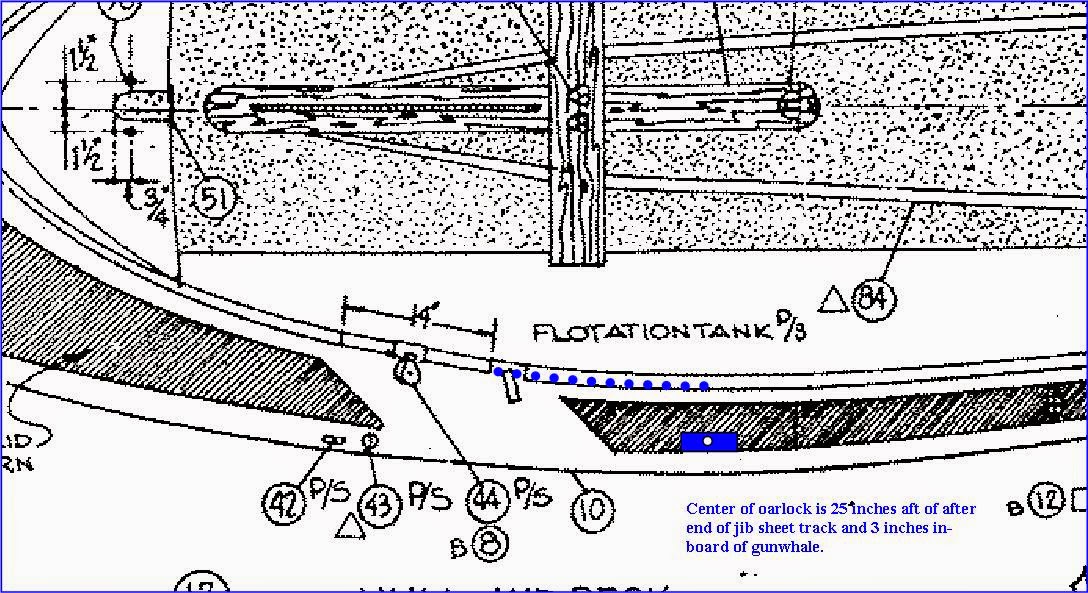 Tanzer 16 if one boat is good, two are better--maybe

I saw the ad on Craig's List and decided I would probably buy the thing myself.  Galvanized trailers are way better in salt water than regular steel.  So I drove up to Point Defiance and took the ferry to Vashon Island. Now I own Tanzer 1313.  It needs some work; there is a break in the aft bulkhead.  I could part it out for about $1000, but I want it to sail again.  I couldn't stand the hull being broken up or turned into a yard ornament.

So I am offering the boat up and hoping someone will buy it so 1313 can sail again.  I may fix it up myself next winter.  There are some interesting details about this boat.  It has the original factory pedestal with snubbing winch--I like my homemade one better.  The deck is not riddled with holes like mine.  It has a mast that is definitely not factory--internal halyards.  Extra spreaders.  It has oar locks--factory installed.  It has the original traveler--in fact two of them. 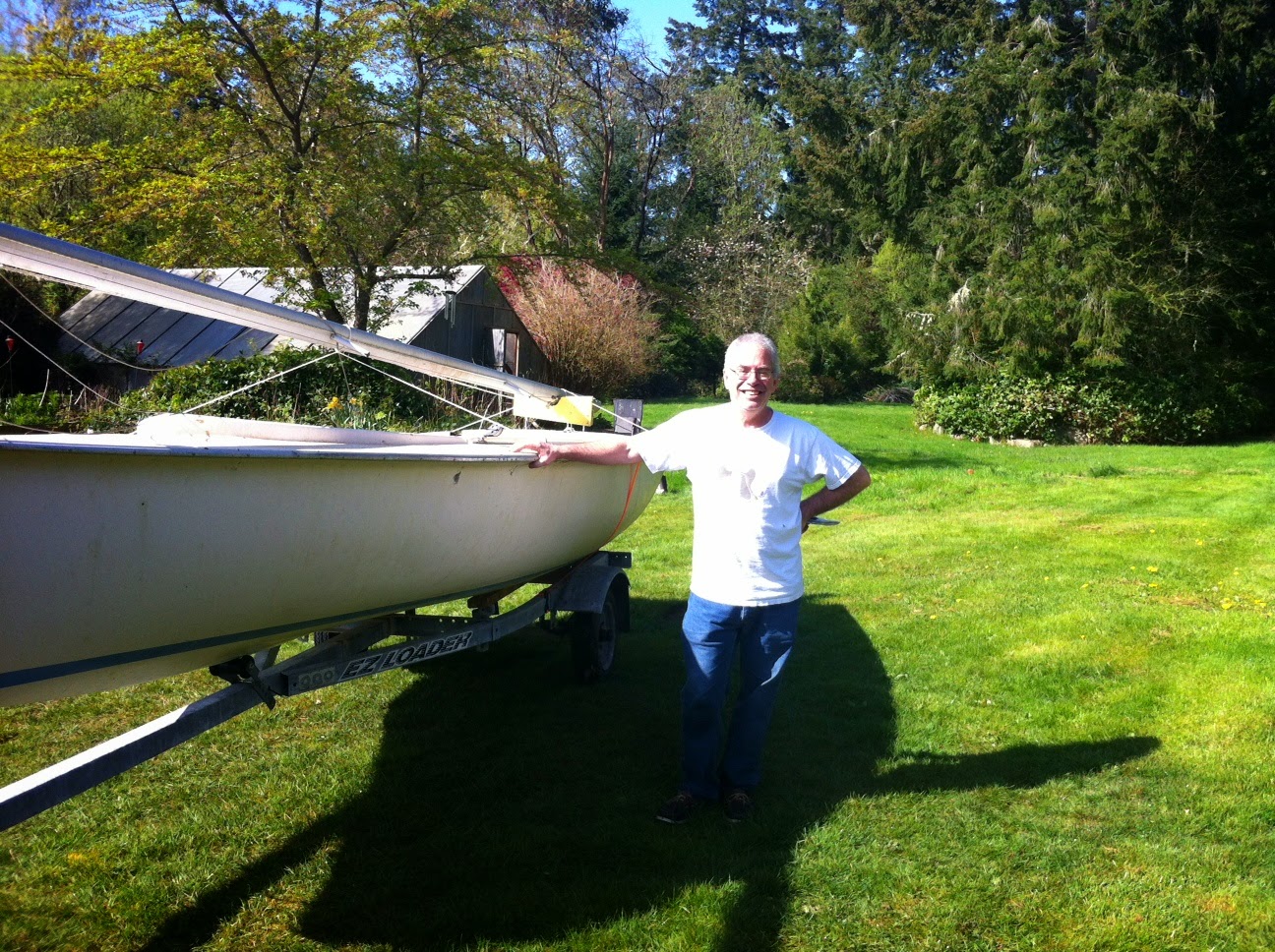 Excerpt from the comp page on this blog.  I will not be actively advertising, until I have moved my boat over to the new trailer--probably sometime this summer.


(I actually bought this one.  I wanted the trailer.  Now I am looking for a good home for the boat.  It is hull number 1313  --mine is 1307--  it is worth more in parts*, but I want to see it sailing again.  Needs work, but the hull  and deck are sound.  The mast is incorrect, but I might be willing to provide a factoy mast for the right buyer who can convince me that this boat will sail again.  Today's price:  $500 includes the trailer, a rudder and tiller, boom, 4 useable, but beat up sails.  It also includes my old trailer that has a new axle and bearing buddies, but it --the trailer-- needs TLC.  One of the sails came off of boat 585. --If I have to fix it up myself--$1800.  My fix will include a hinged mast for easy set up as well as the fiberglass repair.) *It could be parted out for about $1000.)
Posted by Jim at 8:00 AM No comments:

Tanzer 16--Testing a Winter's Worth of Improvements

Tanzer 16--Testing a Winter's Worth of Improvements -- April 3, 2015 --  There were two little glitches, easily resolved, but all of our little iterations of improvement worked well.  April 2 started out frosty, but warmed up to 58 degrees (F). Winds were predicted to be 5 - 10 mph out of the SW. We had been planning this outing for two weeks and made sure we had rain gear. We didn't need it.   Thursday was the only dry day of the week.

The mast went up smoothly--came down easily too.  Glitch 1:  I did not have the gin pole on the packing list and subsequently we had to dash back from the marina and pick it up.  It was such a slow day at the marina that nobody objected when we left a half-rigged boat the staging area for 40 minutes. The A-frame is now on the check list.  I have alway had a terrible memory*; that's why I tend to be hyper-organized.

Re-routing the halyards down through the hull and back the centerboard worked well.  Much easier to single-hand.

The little winch used to tension the halyards worked like a champ.

The new arrangement of the traveler with an extra block for 2:1 mechanical advantage made it easy to adjust the boom position even with a steady breeze -- for the few minutes we enjoyed a steady breeze.

The tiller snubber shock cords made it much easier to let go of the tiller for just a second.  (We were able to experiment with shifting weight to balance the helm--the rig is in tune.)

We tried out the topping lift for the spinnaker pole but didn't actually need it since it was a beat out and a beat back--when we didn't have to use auxiliary power (see Tony above).

We never actually used the new anchor, but it fit in the lazarette nicely.

So all in all a great little first sail of the season.  It was a winter well spent.  We think we are ready to race!

Oh, Glitch 2:  The beer cooler was a little too big for the lazarette.  Tony is working on finding us a smaller cooler.  Now all we need is our new T-shirts, hats and Genoa.