No More Tangles--Tuesday, November 29, 2013--One of the really nice things about the Tanzer is that most of the mainsheets are out of the way.  They drop from the back of the boom to a stern mounted traveler system.  The final block and cleat are on the centerboard trunk.  Lots of room--little spaghetti--good!

Unfortunately the main sheets have a tendency to tangle up around the two stern mooring cleats--especially unhandy when you are trying to gibe in a fresh breeze.  In fact it is so unhandy that the only way you can untangle them is to tack to take the pressure off the sheets and undo them while you are head to wind.


It could be dangerous and certainly doesn't contribute to smooth gibes--solution:  Make up some covers for the cleats that will prevent tangles.  Finished them today.  Started by gluing up some 3/4 mahogany --the same stuff used for the tiller.  Then hollowed it out with Forstner bit and chisel.  Rounded the corners with a spindle sander; then rounded the top with my biggest round-over router bit.

Maybe I broke it; maybe it was just broken -- Sunday, October 20, 2013 -- Three weeks ago when the Tanzer got moved into the covered bridge* I noticed that the trailer coupler was bent and a bolt was missing. 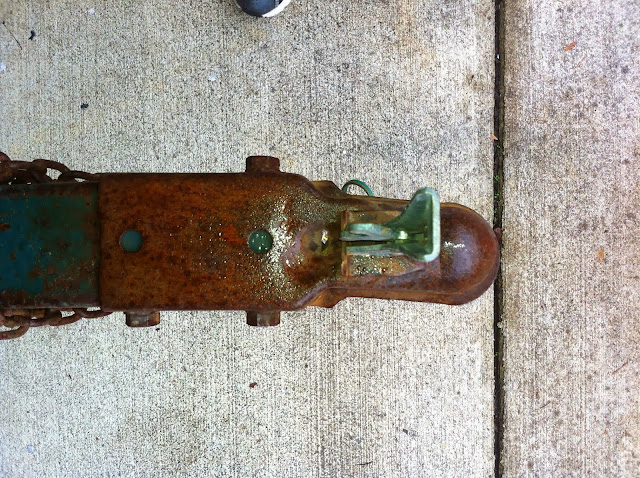 Truth be told, there is a good chance I broke it by backing the trailer at too sharp an angle;  I am in the 5th percentile of trailer backers.  The only people who are worse at trailer backing have limited vision, stiff necks, and arthritic hands.  But, in any case, it is now replaced.  Amazing that after 40 years, the new coupler still has the same part number and fits the tongue holes exactly.  The instructions say that you can use four bolts (with nuts inside the tongue tube--tough to tighten) or two half-inch bolts.  The boat and trailer probably weigh less than 1000 pounds, I went with two bolts. Since the sheer strength of a single 1/2 in bolt is in the neighborhood of 8000 lbs, that should be plenty. 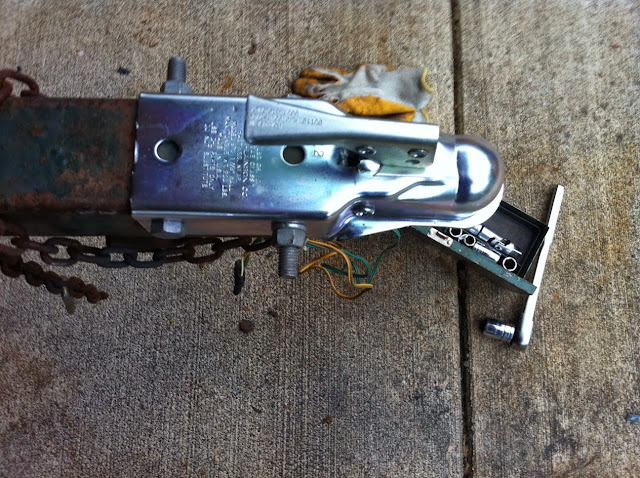 *The covered bridge used to be a free standing carport open on all four sides.  We enclosed the long sides, and left out windows--it looks a lot like a covered bridge.  That's where the boat will stay this winter.  Racing starts in May so it will be there until the weather gets good in April or May or June...plenty of time for the three or four little projects remaining.
Today's cliche:  Victory favors the bold; disaster goes looking for the foolish.

Tanzer Plans - Wednesday, October 2, 2013 --Received an email from Phil Hopewell in Burlington, Ontario, Canada.  Phil has 1967 Tanzer he bought from the original owner.  In addition, he picked up a complete set of spare parts with a hopeless 1975 hull attached.  Not to worry!

Phil will recycle all the parts, and the hull has gone on to become the tooling for a wooden boat that someone else is building.

Phil was nice enough to include a set of Tanzer 16 plans that you can actually read. This particulr PDF came to him from Arch Altman, president of the North Carolina Tanzer Association. Other sets out there on the Internet are almost illegible when you try to blow them up.  Phil's contribution is much appreciated by those of us who need to make a part now and then.  If you would like the  PDF for your own use, email:  jslosson@aol.com.