Tanzer 16 -- Painting -- Rubrail and other details

Tanzer 16  -- Painting -- Rubrail and other details -- May 8, 2016  The first race is Thursday.  We won't be ready. But we kind of knew that a couple of months ago. That's why we volunteered to take the first committee duty.*  But we are getting close to finishing the painting.

I will need help to get some of the fittings in.  I will be crawling into the lazarette or under the foredeck while Tony turns the screws.  Things are all laid out so that should go pretty quickly. 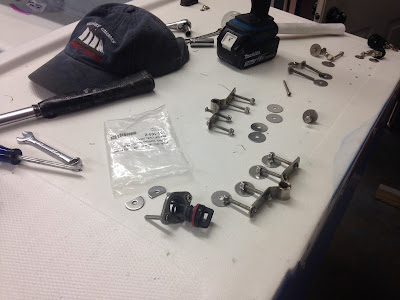 In the meantime, I have been doing what I could get done alone.  Applying decals and installing the rubrail.  Taco has some great videos on rubrail installation.  All of them show two people doing the work.  That would be easier, but with a few strings and sticks to hold up the far end, one person can do the job.  There are people who would help me, but none of them wants to be available at 5:00 in the morning.

The new rubrail came from West Marine; it is wider than the old one, and it looks pretty nice.


The decal on the quarter does not show up on the original plans, but Ron, the previous owner had some made.  We installed new ones after painting simply to help break up the large field of blue. That's a lot of blue when the hull is just one color.  If you want some for your boat, there is a link to a sign shop here in Olympia that has already created the digital artwork. 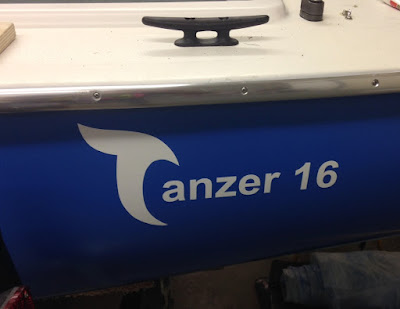 Of course we had to add the obligatory numbers, and they look pretty nice too. 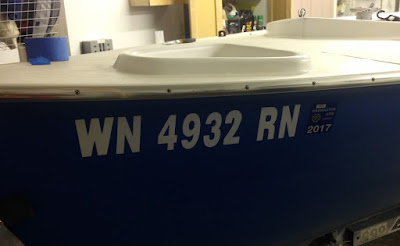 It's coming together.  Of course I sent my new Genoa all the way back to Schurr sails in Pensacola, FL before I even took it out of the box.  I got a space on the dinghy dock--didn't think that would happen in my lifetime.  So that meant we needed the cover added to the leach.  WHO KNEW?

*In our fleet everyone is "supposed" to take one turn at committee boat duty.  Those three races are scored as your average for the season.
Posted by Jim at 7:44 AM