Hello from Alabama, just north of Huntsville, in Meridianville actually (yes, Alabama has a ton of 'villes). I just purchased my first sailboat, a 1984 Tanzer 16, number 1573. I picked her up off of Craigslist here locally from a gentleman that purchased her (at least) 2nd hand in North Carolina (at a garage sale no less) up around some of the lakes where the T16.org folks are/were, but he seemed to not have any knowledge of them.
....

My new boat (which is nameless for the moment but previously "Loose Crew") seems to be well found and quite solid, with very few cracks, and even those few seem to be superficial, at least for now. The sails, Main and Jib, seem to be in great shape for their age, as does the rigging. The rudder and centerboard are both in good shape as far as I can tell, no cracks or missing chunks, She also came with a nice galvanized Long's trailer, with new(er) LED lights.

And that is about it. I have no manual or documentation, other than the original Statement of Origin from Tanzer to Dicken's Dock in N.C.. I seem to recall you having or knowing where a high resolution .pdf is located. Could you send it to me or point me to it's location? Also, if you happen to have an extra Genoa or Spinnaker and pole lying around, I would be interested in them as well. I read another gentleman's accounts of sailing his O'Day DaySailer here in the TN valley and he had changed out his Jib for a UPS, which if I remember correctly, is a Utility Power Sail and is bigger and lighter than a standard Jib, which is helpful here due to the less than optimal winds. I know the T16's Genoa is still 4.4 oz, but it's increased size may be helpful, I think? My wife and I just plan to day cruise on the various lakes here, no racing, at least not yet.
This is my first sailboat, I haven't sailed consistently in about 20 years, since my Boy Scout Summer Camps in the Louisiana woods, and I am hoping it all comes back to me out on the water. But, any help and advice you can provide would be most appreciated, especially diagrams, rigging setups, things to watch out for, etc.
I just realized how long winded this email has gotten. Thanks for any help you can provide, I really appreciate it! Looking forward to hearing from you, as well as seeing your next blog post!
Thanks again,
Brian Jones
Meridianville, AL
T16 #1573

Brian included a couple of pictures and we have added him to the directory.  I predict that he and his wife will have a great time in this boat. 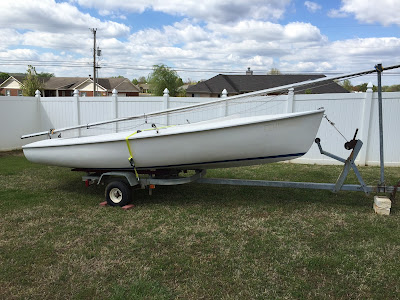 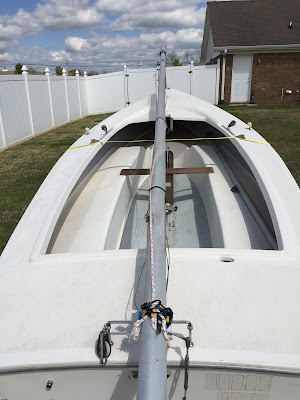